Coronation teeth, or wherefore and how a crown?

One the more common (and likely increasing in necessity) procedures in any general dental office is crowns.  Common as they may be, they still require some clarification on their uses, expectations, and for those who like the nitty gritty, the process of their fabrication.

When defects such as cavities are small, we can manage them predictably with fillings.  (For our purposes, predictable means “with a good expectation of success”).  However, when fillings or decay get large, fillings will not hold up over the long term.  In fact, a filling on a back tooth exceeding one half of the intercuspal distance will decrease the force required to break that tooth by 50%.  Want to see an example?  Here is a case that is quite routine in our office.

This tooth broke while chewing on bread (“In Russia, you don’t break bread, bread breaks you!” or some other groaner here).  Obviously it was not the bread that broke the tooth, it was the hundreds of thousands of chewing cycles prior to the break that fatigued the tooth to the point of fracture.

In this case, the remaining wall of tooth around the filling was insufficient to withstand the chewing forces.  We repaired the tooth temporarily with a white filling, as seen below.

However, we are under no illusions that this should be the final step.  This is what the tooth looked like after we removed the silver filling, and before the white filling was placed.

Notice the dark fracture line still evident (in the part of the tooth closest to the top of the photo).  If we simply place a filling in this tooth, regardless of this material, we can expect that this fracture will continue to enlarge.  Although there is nothing that can stop crack propagation, at least a crown will slow it down.

The purpose of a crown becomes evident when you see its form.  Think of a thimble – it is something that wraps around and over the top of a finger.  A crown does the same thing – wraps around circumferentially and over the top of a tooth, but happens to be shaped like a tooth.  By binding a tooth in this way, it helps prevent any further splintering apart of the tooth.

Ah, but how does a crown not make the entire tooth bigger than the original, if it wraps around and overtop?  We merely need to shave a certain thickness of tooth away to make room for the crown.  A thickness of 1.0-1.2mm around, and 1.5-2.0mm off the top.  This will be adequate space for the crown material to be sufficiently strong, and enough underlying tooth to withstand biting forces.  A case from our office demonstrates:

1) A heavily filled upper left premolar requires a crown.  Under local anesthetic, the tooth is reduced in the dimensions listed above.  An impression is then taken, a shade (colour) is recorded, and is then sent to a dental laboratory with a prescription for a crown. 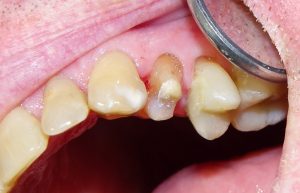 Upper left first premolar prepared for crown. Upper premolars are notorious for fracturing, likely due to a combination of small size, prime chewing area, and steep cusps. In this case, a large filling and fracture lines within the tooth warranted the crown.2) Below are some photos of the work that returns from the dental lab.  The mould is converted to a plaster replica of the tooth, and (in this case) an all-ceramic crown is fabricated to fit the tooth.

3) Approximately two weeks after the initial appointment, the temporary crown is removed and the final crown is cemented into the mouth.

Our consideration for crowns begins when one or more of these situations arises:

1) A back tooth that is heavily filled or has had root canal treatment.

2) A tooth that requires improved aesthetics but cannot be served with simple filling material.

3) A tooth that has suffered traumatic injury that cannot be left as just a simple filling.  Similarly, any tooth that we fear has a high risk of fracture unless protected by a crown.

4) In larger reconstructive cases, teeth that need to be built up to restore lost height.  This would include such examples as people who have worn down their back teeth through grinding, acid erosion, or just a lifetime of heavy fillings.

Does a crown make a tooth stronger?  Let’s be clear: there is nothing as strong as a real, intact tooth.  That said, if the tooth has been previously compromised by decay, a larger filling, or root canal, then a crown will improve the resistance to fracture.  However, if there is just too much tooth missing, then a crown will not restore strength to the tooth.  Those teeth would likely be better off replaced with an implant.

How long does a crown last?  There is no “best before” date on crowns, but nothing lasts forever.  The wear and tear of years of daily use will eventually do its damage – this can come in the form of porcelain fractures or cement breakdown.  According to literature, the survival rate of crowns is 75-80% after 18 years (De Backer et al, International Journal of Prosthodontics 2007 20:229-234).  The most important thing one can do to maximize crown lifespan is to maintain good oral hygiene – brushing, flossing, and proper rinses if recommended.  If decay is going to occur anywhere on a crown, it will be right where the crown meets the tooth.

Hopefully this clears some things up.  For a personalized assessment of your oral condition, please contact us!  We’d love to be your dentist in Barrie. 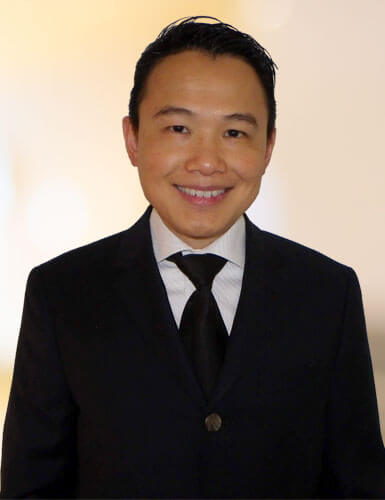