What are Endodontic Dental Services?

Endodontic dental treatment essentially refers to root canals. When a tooth has had irreversible damage to the nerve, there are only two options: either the tooth has to be extracted, or an attempt can be made to save the tooth via a root canal. Root canals (endodontics) involve several considerations, and sometimes a tooth is better off being extracted than being saved. For every root canal contemplated, and before we can begin endodontic treatment, we must look at how much original tooth remains as well as its periodontal (gum) condition and the relevant biting forces on the tooth.

In a root canal, our goal is to clean out all the dead and dying material from inside the tooth and refill the canals to prevent reinfection by bacteria. This is where using a microscope really helps the result, as some of those canals are so hidden that trying to find them without a microscope would be like finding your keys in the dark. The attached photos of a root canal case are x-rays, because externally, a tooth looks basically the same before and after a root canal. You will see on the image that the inside of the tooth is filled up from top to bottom. 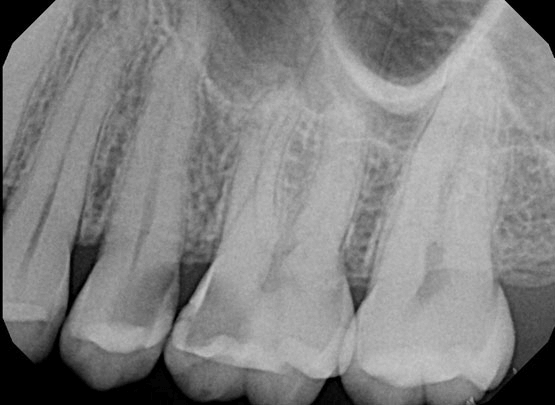 Root canals on teeth 25 and 26 (upper left second premolar and first molar), done because of obvious pulpal decay (decay into the nerve) on both teeth. In these cases, there are only two appropriate options: extraction of teeth, or root canals to preserve them. This patient opted to save both teeth by having root canals done on both teeth. Later, he would go on to have crowns on both teeth to prevent fractures of the teeth.